"High" In the Sky 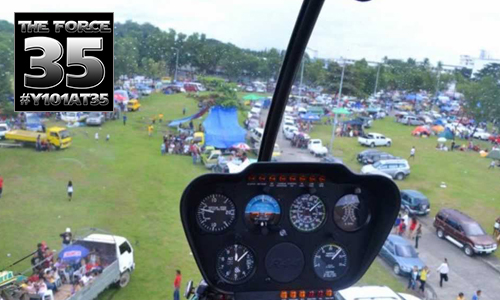 I've already mentioned that Y101FM is always first when it comes to almost – well – everything. Always First, I tell ya! This radio station keeps on building up flames (not literally) wherever and whenever.

Last Sinulog 2012, Y101FM was able to give everyone an awesome chance to witness Sinulog high up in the sky. This is the first radio station to pull out a cool chopper for live broadcasting, and for people to experience a helicopter ride above the Sinulog parade. It was the only way to see the city as a whole during an event where everyone gathered in one place and celebrated as one. It obviously is a "once in a blue moon" kind of thing to be able to ride in a chopper (unless if you are Donald Trump).  And guess what, you only had to pay PHP 1,700.00/person to board on the exclusive Y101FM chopper. Now that was a spectacular way to watch the Sinulog feast!

Y101FM's Eye In the Sky definitely puts you high up in the sky!