The singer's latest release is more than just a fairy tale, but a family affair.

Alice Through the Looking Glass, the sequel to the Alice in Wonderland (2010) is set to release later this month but pop star Pink has already released the music video of one of the movie's OSTs, Just Like Fire yesterday. 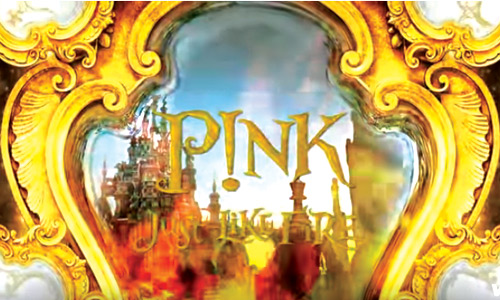 We all adored how the cinematography, costumes, makeup and special effects have lived up to the expectations of fans around the world and hopefully, the movie will be as, or maybe even more entertaining than the first release.

A man is seen calling out to Pink, "Babe, are you just gonna hang around all day?" The guy who calls the singer babe is no less than her hubby, Carey Hart. In the power anthem's music video, Pink is seen dangling from pink silk hanging from her ceiling and in real life, Pink is an aerial acrobat enthusiast; as seen at her performances during the 2010 and 2014 Grammys. The singer is then seen being catapulted into a mirror and is being transported into a world where she plays human chess (which by the way has a fashion pieces inspired by Lady Gaga's all-black ensemble in Bad Romance) and has tea with the Mad Hatter and her daughter, Willow. The fantasy comes to a screeching halt as Pink was apparently mad and is seen being dropped by her husband at a mental institution.

Pink is one of the industry's most powerful performers and sometimes she's not given enough credit. She knows how to tug your heartstrings with her powerful lyrics matched with her unrelenting voice. Both the video and the song tells its viewers the importance of self-love and acceptance even if others think you're mad. Pink has always been known to advocate positive body imagery over the years so it makes us thankful that there are still performers out there who stick to inspiring fans with their beliefs. Although the music video wasn't a giveaway to what we might see in the upcoming release, we're hoping that we get to jump into more adventures into the bizarre yet enchanting Wonderland.