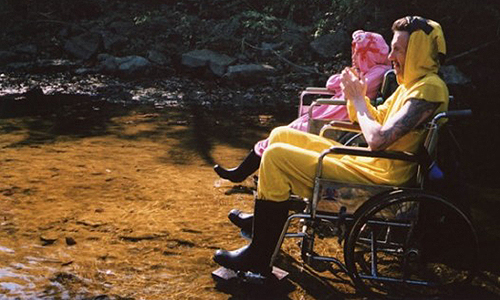 We know Die Antwoord as an out of this world group who leaves us with a weird state of mind after watching their music videos but little did we know that they have an awesome short film.

Written and directed by Harmony Kornine in 2011, the story opens with two people (Yolandi and Ninja) on a wheel chair “strolling” while Yolandi’s voice plays in the background talking about how they are looked down because of their disability. Later in the film, you get to see that despite their situation, they still continue to live the “gangsta” life.

There is something about short films that stands out and I cannot explain why. Umshini Wam is no different from that observation.  Take note that they are speaking mixed Afrikaans and English with an accent so it would take a good ear to comprehend the dialogue but you get used to it after a few minutes. At first, you will find that the movie is plain and random but I suggest you keep your eyes glued as every minute passes; the show gets better and deeper.

Over all, the video is sad (you have to watch it to find out why). This video is highly recommended for people who love to have that psychological after-effect.