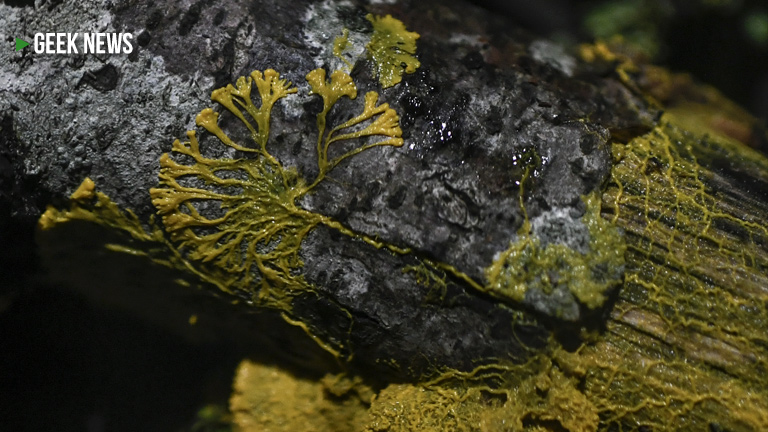 While mold is generally looked on as the stuff of nightmares or, at best, a minor annoyance, one strain has made waves around the world this year for its amazing feats of intelligence and athleticism. The species in question, a bright yellow "slime mold" called Physarum polycephalum, has officially rebranded itself as "the blob," and is currently headlining its own exhibit at the Paris Zoo.

"Mold" may be a misnomer, as slime molds like the blob aren't fungi like the stuff you (should) regularly scrub off your shower tiles. Instead, it's considered a protist, part of a kingdom of misfit lifeforms that are neither wholly animal, vegetable, bacteria or fungus.

Partly due to its strange station in life, scientists have been eager to study the blob, exploring the surprising abilities of this substance that can move, learn, heal, and reproduce sexually despite seeming to lack the necessary equipment for, well, just about anything.

Similarly to the main character in the eponymous 1950s horror movie classic, the blob is amorphous, lacking any of the biological structures generally associated with independent movement (such as muscles or limbs) and yet, much like the blob of cinema, this slime mold gets around. Maxing out at speeds up to four centimeters per hour, the blob moves through a process called "shuttle streaming" that involves making waves in its cellular protoplasm (goo) to propel itself forward.

One thing the blob moves toward is food. Exploiting its reported fondness for oats, back in 2016 scientists put an impediment—caffeine, which the blob does not enjoy—between some slime mold and its serving of grains. They were amazed to discover that despite lacking a brain or nervous system, the blob soon learned that it could move over the caffeine unharmed.

"It can find its way through a maze, it can construct efficient transport networks, sometimes better than us, actually," Audrey Dussutour, a researcher at the French National Center for Scientific Research said.

Ladies, if your partner:
-hates salt
-is really good at mazes
-resists taxonomic classification
-has 720 sexes
-transmits knowledge by fusing with another individual

Besides its memory and strategy skills, the blob also has great regenerative powers. In a recent paean to slime molds for Popular Science, writer Rachel Feltman extolled the blob's ability to heal, how when separated, say, by a zealous scientist with a scalpel, its multiple nuclei—because while it can grow to enormous sizes, each blob is structured as a single cell with multiple nuclei—will work to put itself back together. "Really, though, this super-quick healing ability is less like healing and more like being able to drop your arm and then pick it back up and pop it on, Mr. Potato-Head-style," Feltman explained.

Feltman went on to explain the much-hyped claim that slime mold comes in 720 different sexes, laying out the complex genetic options that slime mold sex cells can create when they meet the right spore and settle down. According to a wiki Feltman linked to on the subject, "What makes slime molds truly successful, however, is that the cytoplasm of the offspring is merged from both parents."