The British hit-makers talk about how they make their music.

In case you're living under a rock all this time, British pop-rock boy band The Vamps stopped by Cebu's shores for a concert at the Robinsons Place Galleria. Although bassist Connor Ball wasn't able to make it due to a knee injury, we were able to get up close with Brad Simpson, James McVey and Tristan Evans during a press conference before their concert. 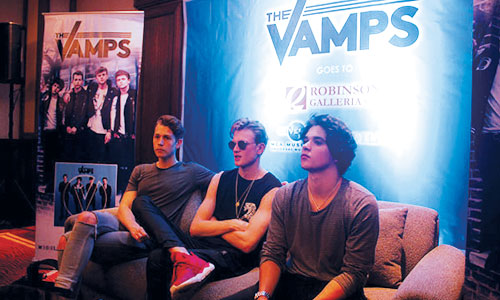 The Vamps were formed by the boys themselves and they are inspired by different genres and artists. They also do covers such as Justin Bieber's Love Yourself and the famous 70's hit Kung Fu Fighting as the part of the OST for the newly-released third installment of the Kung Fu Panda.

Travelling around the world is also one of the things that inspire the way the band makes their music. During their downtime during their travels, they find time to explore different places and enjoy the local culture. During their stop here in Cebu, the band got the chance to visit the Cathedral. They even expressed during their press conference that real life situations and relationships also contribute to how they write their songs. Musical influences include AC/DC, Arctic Monkeys, Foo Fighters, Taylor Swift and even Eminem as well as House Music inspire them to create their music.

It is also good to know that the band accepts opportunities to evolve their sound and writing style. With their latest album Wake Up being a huge hit, they hope to start working on their third studio album by this year while being able to travel around the world even more. They even expressed that they want to collaborate with DJs such as Calvin Harris, Sigma and Disclosure in the future.