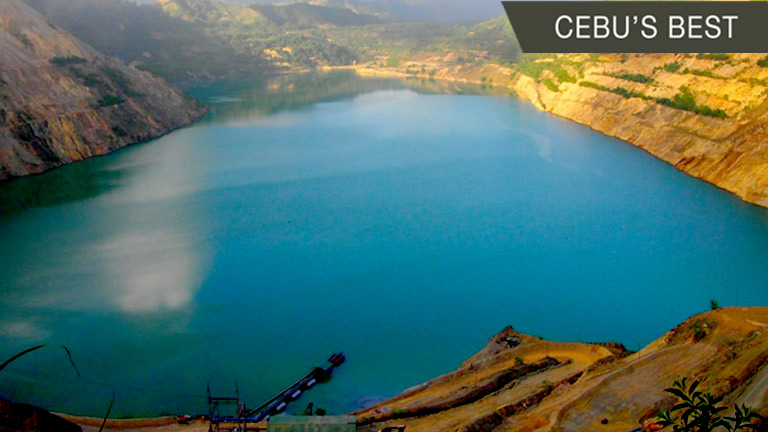 Also known as the Biga Pit, the man-made lake is easily recognizable in space!

I first discovered the existence of Biga Lake, or Biga Pit as some folks call it, through exploring Cebu on Google Earth. I was allured by the stunning blue waters of the lake and curious why I rarely hear about it.

Drainage for the waste materials of Carmen Copper Corporation Mines. Can't expect that inspite of having these materials they still have a fresh water the next mountain on it. They're truly in a responsible mining. Two thumbs up CCC. ? #bigapit #depression #hole #pit #responsiblemining #mininglife

It turns out the pit and the waters the fill it aren’t natural. The Biga Pit was dug up by the Carmen Copper Corporation, the country’s largest copper mine and leading base metal exporter. That explains why there are few tourist pictures of the lake as the reserve doesn’t allow most people entry into the facility. A bisaya traveler recently recalls being told by security guards that visiting Biga Pit must be for educational purposes and not for adventure and/or recreation.

But a few people can always find their way round to see it. Hikers and explorers can haggle habal-habal drivers to take them to see the mysterious pit/lake. People who actually saw the lake claim that it was eerily peaceful. The lake may be beautiful and calm, but it’s ironically a waste disposal site whose water is mixed with toxic waste.

Back in 2012, the Cebu City Police Office even found the pit the “perfect” place to detonate and bury at least 25 World War II-era bombs recovered from Kawit Island.

Also, to answer your question, the pit/lake is called Biga because it’s located in Barangay Biga, Toledo City. Biga means chariot in Portuguese, but I don’t know why the Barangay is named as such.