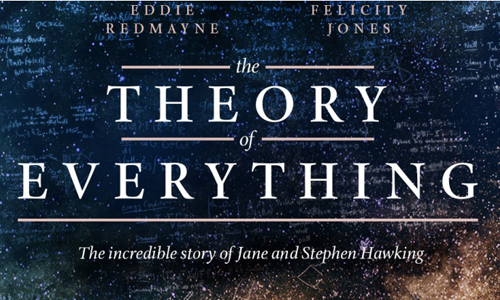 Stephen Hawking said that this movie is the closest thing to time-travel.

The movie is beautiful but the only problem is that, it was based on his ex-wife’s memoir, Travelling to Infinity. Personally, I wanted more of Stephen Hawking. The movie lacks more of his thoughts and point of views. I could not see what was really in his mind since the movie is a bit biased. It would have been better if it was based on Stephen’s actual views and not his ex-wife.

Another thing is that, the movie is more of a love story. No one expects a love story especially when Stephen Hawking is involved. The movie would have been much better if it focused on Hawking’s struggle on studies, work and lastly his disease.

All in all the Theory of Everything is still a great movie and it will give some people who don’t know Stephen Hawking a starter or a brief review of who he is. If you really want to know the life of Stephen Hawking then I suggest you read his books and watch his documentaries.