Now ideas will be alive as ever!

Now available for pre-order, the Microsoft Hololens developer edition is now up for grabs and everyone can now apply to grab the holographic headset that costs a hefty $3,000 price tag. Aside from this, Microsoft this week began to accept applications for pre-orders for its HoloLens augmented reality device and will be geared towards software developers looking to build applications for this new environment. 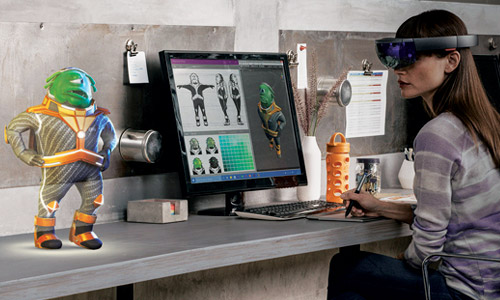 So how does it work? The HoloLens uses two see-through holographic lenses each of which consists of three layers — red, green and blue which have an optical projection system to generate multi-dimensional full-color holograms. Maximum resolution is 1268x720 per eye so you can pretty much have your apps adapt with real life.

Some reports even claim that one can see right through a wall with this too- according to Windows Central forum member NikolausD, "Since the device knows your space even when it can't see all parts of it from your current angle, it can potentially show you - or hint at - real or virtual objects that are behind a wall in another room, behind a closed door, or under a desk, by providing you with an x-ray-vision type of view. That way you could not only hear, but also see a notification going off in another room, or see enemies approaching around the corner in a game."

You can even fill up an entire room with running apps, and you can even put multiple instances of the same app on different spots within your place; such as having a video player in your bedroom AND kitchen. The Windows Central user further explains, "Now you can bring up the Start menu by doing the "blooming" hand gesture and select an app. This doesn't open the app yet - it just gives you a little tile or 3D object that serves as a launch point for that app, and you put it anywhere you want in your room. From now on that app sits there permanently, until you move it to another spot or remove it."

Right now, more details are still to be announced and the company already sold up to 15,000 units in under 10 minutes of being made available to the public.