Joel Villanueva is unexpectedly and surprisingly now a shoo-in to have a seat in the Philippine Senate as he currently ranks higher than most incumbent senators. He says he owes his victory to advertising in radio.

“For 90 days, I had 21 to 24 radio interviews every day. Whether it be AM or FM, I gave interviews. So by 11 a.m., it was as if I’d already gone through the entire country”., senatorial candidate Joel Villanueva said in a live interview. 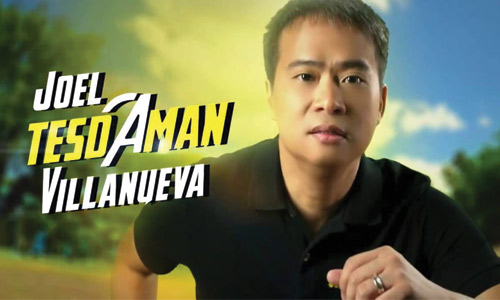 The former director general for Technical Education and Skills Development Authority (TESDA) used to rank in the 35-45 slot in the survey polls. Now he is one of the leading senatorial candidates who is assured to have a spot in the senate this term. His campaign success has been the talks of a lot of advertising analysts. Most candidates put themselves out to the public through television, flyers, banners, and newspapers but Villanueva prioritized what he thought was the most important form of advertising there is. Radio.

TESDA-Man advertised himself through radio a lot and it proved very effective. Nobody expected that he’ll have a spot within the senatorial magic-12. Villanueva didn’t have an advertising agency in the earlier days of his campaign and he didn’t have enough money to get himself a TV spot. Sometimes he’d check TV stations and find out that they’re cluttered with a lot of political ads and he’ll have no chance to get exposed effectively.

That’s why Villanueva looked into radio advertising where he would do 24 radio interviews a day. This helped him get exposed to wider areas. The local people especially in rural provinces would hear about TESDA-man and who he is when most of them can only afford a radio as a form of news and entertainment. The radio exposed TESDA-man to new voters who might have just heard about him on the radio for the first time.

So when Election Day came very close, Villanueva rose very quick in the polls from 35-45 to the nun umber 1-2 positions A very impressive feat for a candidate who’s running for the senate for the first time.

Joel Villanueva is a man whose victory was achieved through the power of the radio. Deciding to advertise himself through radio rather than television proved to be the wisest choice. That’s why advertising in the radio is the most effective way.

That’s why if you’re going to advertise (and you should), then it’s important to spend your advertising money where you get the most results; Radio!

The heart of your business success lies in its marketing. Through marketing your product or service is introduced and promoted to potential customers. Without it, your business may have the best product or service there is, but none of your potential customers would know about it. It is important for any business to be marketed in any way through advertising, public relations, promotions and sales. Without marketing, sales may crash and your company might close down.

If you’re a business who has just started out in the industry, then Y101 has got you covered. We’re here to explain to you, a potentially successful business, the importance of marketing and why it’s great to advertise in the radio.

A business has to have control in its breathing. Just like in our respiratory system, we inhale and exhale air in order to stay alive. A business also has to get money out and get money in to keep itself from dying. A check book is money out, and marketing is money in. In order to gain control of your cashflow, then you have to balance things out and marketing is the wisest choice.

Through marketing especially in the form of advertising, your business will get exposure, new clients, and money. These three key aspects are what make or break a business. If you’re going to advertise (and you should), then it’s important to spend your advertising money where you get the most results; Radio!

Compared to television advertising, the radio reaches its customers to buying things in immediacy. Most radio listeners are on their cars on their way to do today’s shopping or something. It’s the best way to advertise your business and will lead potential customers driving their vehicles to stop by and check your products or services out.

Radio can be heard everywhere. In the car, at work, even online. A potential customer is listening to a radio wherever they may be. So it’s wise for a business to advertise to a medium that is easily accessible anywhere.

A potential client can show a picture, or he can read it off a newspaper. But nothing really beats the intimacy and emotion that is brought by human voice in the radio.

4. You’re Always on the Front Page with Radio

In the newspaper, advertisements are cluttered. You’ll get surrounded by your competitor’s ads. In television, a high chance that your potential customer is not paying attention and is busy doing other things at home. In the radio, you are front and center. It’s only your ad and the potential customer in the confines of his car seat. Nothing will get missed.