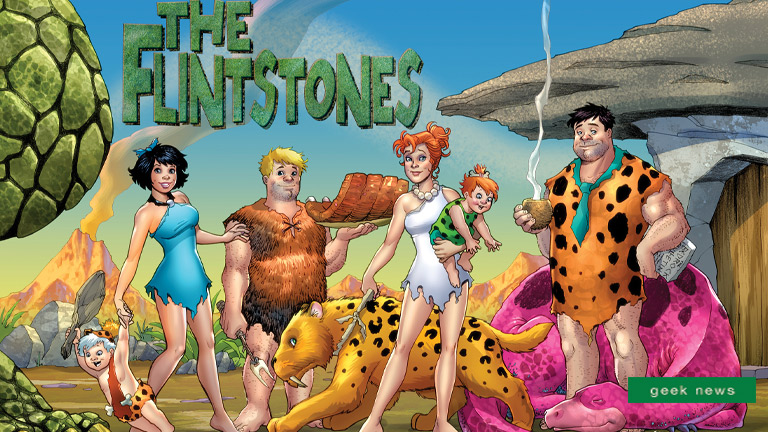 The Flintstones got a makeover in the DC Comics new initiative, Hannah-Barbera Beyond.

The Flintstones is the 2016 comic book series based on the animated tv series produced by Hanna-Barbera in the 1960’s. The series is published by DC Comics as part the comic book initiative Hanna-Barbera Beyond that takes imaginative new takes on classic Hannah Barbera cartoons like Scooby-Doo and Future Quest.

The Flintstones comics is written by Mark Russell (who created God is Disappointed in You, a modern retelling of the Bible) and illustrated by Steve Pugh. The first issue was published in June 6, 2016.

The new Flintstones became an unexpected gem among DC's 2016 relaunch, a weird social satire whose strength lies in inappropriately funny moments of downbeat misery. It includes storylines about marriage equality, suicidal war veterans, and the psychological impact of consumer culture, and while that probably sounds like a nightmarish parody of gritty reboots, this comic is actually brilliant.

Flintstones #1 takes place in the proto-civilization of Bedrock City, a place where people enjoy the conveniences of modern life like via wireless shell phones. Readers first see Fred Flintstone at work, where his boss Mr. Slate tasks him with helping recruit three strong but naive Neanderthals to the company. Fred’s wife Wilma is an aspiring artist in this new series and issue one’s subplot is focused on her inclusion in a gallery show.

You can read the comic book series here.