Today's bling takes it up a notch.

The last several months introduced wearable tech in the market, as pedometers and smartwatches are starting to be some of today's must-have items. While many of us like to own gadgets that help us get in shape, maybe some want to look classy too while they're shaking off some pounds. And that's where the famed crustal producer Swarovski comes in. 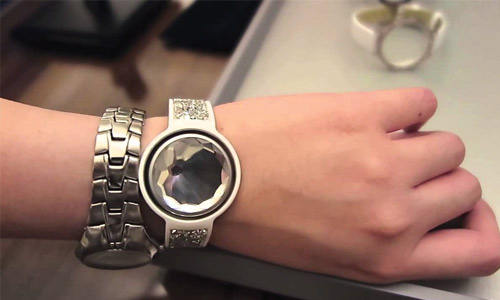 Innovation has always been an important aspect of the business- Swarovski has worked with Philips in the past to produce earphones with crystal accents, but this happens to be the company’s first for wearables. By unveiling a blinged-up accessory that is able to log physical activity, the brand's "smart jewelry" aims to reach out to women who are enthusiastic about fitness.

Apparently, Swarovski is among few companies that have started to penetrate the market with their smart jewelry products. The Australian crystal manufacturers have teamed up with Misfit Wearables to create a tracker that functions just as a pedometer would but having an Swarovski Activity Crystal places prestige and elegance over strenuous activities. It's safe to say that the company has produced one of the most attractive, feminine, and functional pieces of smart jewelry out there.

"Most of the other activity trackers in the market are very sporty. The intent was to create one for ladies – something that they can wear during the day, as well as in the evening or at night,” comments Swarovksi’s managing director for South East Asia, Aymeric Lacroix. Two bracelet designs are available, each created in a range of fashionable colours: Swarovski’s iconic Slake bracelet or its Deluxe version, both studded with a string of dainty crystals for an easy to wear silhouette.

Aside from this collaboration, think of how Apple's iWatch worked with Hermes to make designer smartwatches. The future is definitely bright for placing some function and tech into style.