Who are the Bootleg Beatles?

Let’s get to know the world’s most successful and longest running Beatles tribute band!

The Bootleg Beatles boasts the recognition for being the first and finest tribute band ever, the band having started since 1980, continue to thrill audiences with their astounding performances and authentic onstage recreations of the original Fab Four’s stage presence, music playing, and singing. They have performed over 4,000 times since their establishment 38 years ago in England.

Their first performance was at a small student gathering in Tiverton, Devon, England. Following more low-profile gigs, the band performed a 60-date tour of the Soviet Union; further tours followed in Israel, the Far East, the Middle East and India. In February 1984, they were invited to perform in the United States, to commemorate The Beatles' initial US tour 20 years earlier. 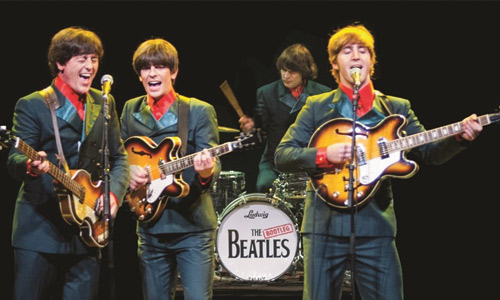 For the most parts of the 80s, their UK success didn’t catch on. It was only in 1990 when The Bootleg Beatles booked 10 shows in cities where the original Beatles had performed in their final UK tour in 1965 that the tribute band was recognized farther. Audiences were small but enthusiastic, and another tour was booked for the following year. Each year their popularity grew, and the crowds who went to see them grew even larger. Their tours expanded and the venues they were set to perform got larger too.

Finally, a gig in Southampton caught the attention of the Gallagher brothers of Oasis, leading to the Bootleg Beatles supporting the Britpop band at Earls Court and Knebworth. This gave the band a contemporary audience and increased their credibility, launching them onto the premier European festival circuit and shared stages with Rod Stewart, Bon Jovi, David Bowie, The Corrs, and Iggy Pop.

On January 30, 1999, the band played on the rooftop of 3 Savile Row, London, former residence of the Beatles' Apple Corps company, recreating the Beatles final public live performance which took place on the same rooftop 30 years earlier. The tribute band also boasts the fact they have played at The Royal Albert Hall more times than any other band. Filling concert halls wherever they go, they faithfully reproduce the look and sound of the original Fab Four to the point where they have received 'official approval from the surviving Beatles themselves!

George Harrison and Paul McCartney have seen the band. Harrison has even spent quite some time with them at a celeb party they were playing. He famously told the tribute band 'You probably know the chords better than I do' Paul , who saw them playing at The Queen's Golden Jubilee in 2002 said jokingly he was gonna come and heckle them. George Martin, the Beatles’ producer has also seen them a number of times and has been very appreciative.

The Bootleg Beatles will be performing this coming September 8 at the IC3 Convention Center.