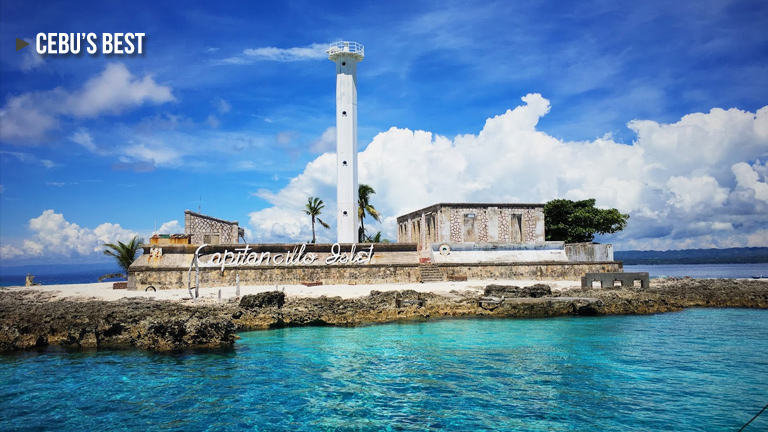 The Islote de Capitancillo now commonly known as the Capitancillo Island or Islet, is a small coral island off the coast of Bogo, Cebu on the Camotes Sea.  It is marine protected area which means that people aren’t allowed to fish near its waters or leave their disgusting waste. There is a diverse underwater ecosystem near this 6-hectare wide Island and the fishes living there wouldn’t like it if your trash are floating around. Also you could be fined up to P1,000,000 if you were to threaten Philippine marine life. Because this place is a protected marine sanctuary, the Capitancillo Island makes it one of the beautiful diving spots around Cebu.

Besides the beautiful waters around it, the island itself is also unique not only for its lonely century-old 25-meter high lighthouse, which flashes three bright lights every ten seconds, but for the folklore surrounding the origin of the island. According to local legend, the Capitancillo Island used to be a ship that was transformed into what it is now today because its captain insulted the local chieftain more than 400 years ago.

The locals say that the Capitancillo Island used to be a trading vessel sailed by a Spaniard named Captain Basilio. According to the people who love telling this story, Captain Basilio insulted the local chieftain datu Bugtopasan. Nobody could say how exactly the captain insulted the chieftain, so let’s just say he made fun of Bugtopasan’s name. The offended chieftain got so mad that he cast a spell on Captain Basilio’s ship and turned it into a rock floating in the sea.

Today anyone can visit the island and nearby resorts even bring their guests there. If you plan to come to Capitancillo Island yourself, you need to be ready for a 2 hour and 20 minute trip from Mandaue City’s North Bus Terminal to Bogo province. The bus fare is about P150-P180. In Bogo, you could go to different jump-off spots like Marangog Cove, Nailo Wharf, Odlot Hideaway, and Polambato Port. From there, you find some boatmen and negotiate a price to take you to Capitancillo Island (which is said to be a 15-45 minute boat ride from the coast to the island or vice versa). You could even stay overnight at the island as long as you and your party clean up after yourselves to avoid getting arrested for “threatening and endangering marine species”.