Why does the U.S. Always Vote on a Tuesday? 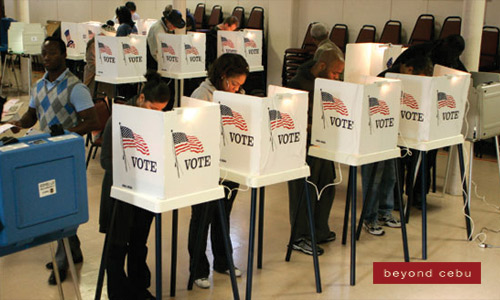 Here in the Philippines, election day is declared a National Holiday.

Since in the U.S.it isn’t, why don’t they just move it on a weekend so working people can vote. The answer is quite outdated.

In the United States, elections for national office is always held on the first Tuesday after the first Monday of November. This 2016 elections, their election day is on November 8, a Tuesday! So why is it always that?

November was a perfect time to hold the U.S. Presidential elections because most Americans at the time were farmers who had a lot of down time during the early weeks of that month after the October harvest. And although they’re done with their harvests, Tuesday was the only day that people could accommodate their schedules.

When their congress mandated a single universal election date, travelling wasn’t easy. (Because there were no cars in the 1840’s). Voters would go to Church on Sunday, spend Monday travelling on horseback to the nearest polling place, and vote the next day- Tuesday.

But since it’s the 21st century already, some Americans find that the fact voting takes place on a Tuesday a major inconvenience. Some of them wake up early to vote, and go to work after. In a survey from the Washington Post, the most common reason Americans give for not voting is that they were “too busy” to vote, which could mean they were too busy working.

Thankfully here in the Philippines it is considered a National Holiday so that our voters can take a break after. We all know how long the lines are in the voting precincts.

So what could be done? The U.S. could expand early voting, move their election day on a weekend, or keep it where it is and declare it a National Holiday like how it here in our beloved country!