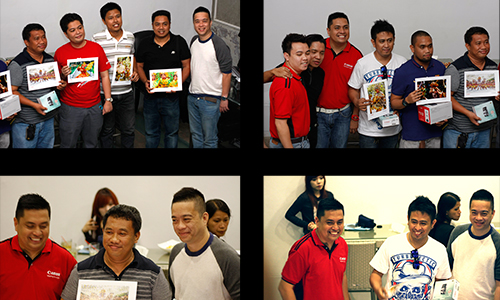 The awarding was held at F Café (The Gallery, Mabolo) and was hosted by the ever lively Jiggy Jr.. The venue was very good to start with- great interiors, food and cocktails. It was special and was just right for the awardees to experience.

As soon as the program started, everyone was glued to their seats enjoying the talks and speeches by Y101FM Station Manager, Mike Olitres, and the jokes cracked by everyone else. The winners were excited to receive their awards and we can tell it from the faces of the awardees – some were smiling and some were tense but covering the nervousness or eagerness with laughs and chats.  Each of the winners was then called and was asked to explain their photos. All of them had really good stories behind their photos which justifies their win.

You can see the sparkle in their eyes as soon as they received their prices (some of us had sparkles in our eyes too as soon as we saw what was in store). They were personally awarded by Y101FM President, Michael Solon.

Here are the Prizes of both categories:

Congratulations to the following:

The program ended with a speech from Max Otadoy (Canon Marketing Manager) and Michael Solon’s closing remarks, but the party did not end there – more food and cocktails were served as everyone enjoyed the night.