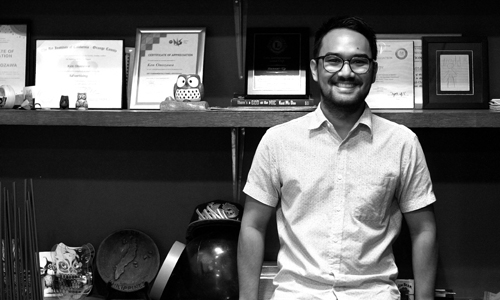 Spectrum, according to Ken Onozawa, started out as a group of friends throwing parties.

Spectrum is composed unique individuals, with their own personalities and talents which makes Spectrum very diverse.

In 2001, Ken started college here in Cebu. He wanted to take up design but it was not available. With the few options he had, he chose to study Information Technology in the University of San Carlos. He later shifted to advertising where he had an argument with his teacher who told him that he was just at the tip of the pen. Ken then told the chairman about it but no settlements were made so he flew to New York to get better education.

This was the time where Ken really had a very difficult time. “It was an intense program”, he recalled. “Imagine 6 years crammed into 3 years! I luckily finished it in 2 and half years because had my other subjects (in Cebu) translated and credited”. Ken elaborated that he had no vacations and no direct family members to run to when he has problems. “It was such a challenge”, he said. Ken shared that being abroad made him experience struggle. He remembers having just 2 dollars in his account and could not work due to his full load schedule in school and other limitations. He found little design jobs to get by and friends who helped him out. “It made me independendent”, Ken said.  After studying, Ken began to work at branding companies and then worked at Sprint.

Ken fears being too comfortable. “If you are too comfortable, you won’t progress…you won’t grow”, he stated. However, he had to face that fear when his friends told him to stay home during his Sinulog visit. The idea of coming home became even a lot more reasonable when he bumped in into Jay Aldeguer, the man he looked up to, told him to come home, so he did. It was a huge sacrifice but it was the right thing to do at the right time. He then realized he had this mission to help Cebu in his capacity.

Ken shared that he made a lot of mistakes but that is because he is a risk taker. “If you want an answer or to find an answer, then just do it”, he advised. He elaborates that mistakes made him the way he is now, maybe a lot better.

Ken aims to build UNIVERCITY as an educational program because he believes that the Philippine educational system lacks a lot of things- good teachers working abroad, education being unaffordable to people and such. He plans to do campus tours and talks soon. Ken shares that whatever he earns will also be used for charity such as giving funds for elementary school “As simple as pencil kits or school kits given to less-privileged elementary student will make a huge difference. “Ken stated. He wants to share his experiences and what he knows through education. He wants to provide training to the kids- the kind of training they normally won’t get from our traditional educational system.

Ken also finds time in small businesses. Since he loves sneakers, he decided to do KICKTIES. These are shoe laces meant to change the look of a shoe. They got the concept from suits and change of ties “you change a tie then it’s a different suit! This applies to the shoes. You change the laces, and it’s a whole different shoe.” It’s a suit and tie thing. Get it?