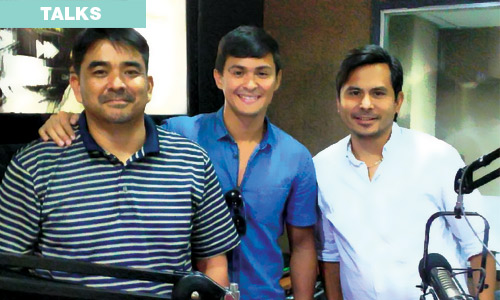 It was a battle of the studs! Chad the Stud finally met his match, Dolce Amore’s Matteo Guidicelli

During Monday’s episode of Y101’s The Midday Vibes, Chad the Stud was visited by another Cebuano heartthrob that can definitely melt any woman’s heart. It was Chad the Stud’s doppelganger, Matteo Guidicelli!

The Dolce Amore actor came by the station to talk about his upcoming concert at the Waterfront Hotel this November 18. The Matteo Concert #MatteoMadeinCebu celebrates the actor’s 10th anniversary in the show business.

The concert, which will take place inside Waterfront’s Pacific Grand Ballroom and Gallery, 8pm November 18, 2016, will also give you a chance to win a brand new Ford Ecosport. Ticket prices for the concert range from P500 to P3,5000, and all the proceeds will go to the Kythe Foundation, a foundation for kids fighting for cancer.

Chad the Stud invites everyone to support a fellow hunk Cebuano for his concert for a cause. Don’t forget to tune in every Mondays to Fridays on the Midday Vibes (10am to 2pm). Only here on the rhythm of the city, Y101, Always First.