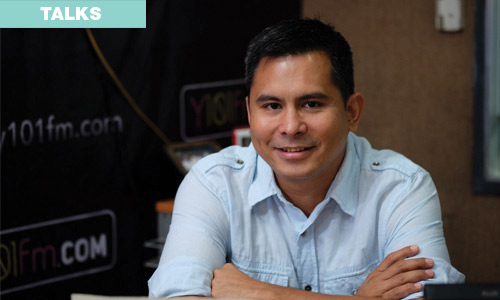 Keep cozy with Chad the Stud as he shares his favorite song for the cold weather.

Some people are not used to the chills that the rainy season brings. Some might stay at home to try and cozy up while the morning skies outside turns dark and gloomy just as the rain falls down. But some people embrace that moment. Other people will run outside to play in the rain and some would even take the opportunity to have a cool and breezy nap. One of those people who’d certainly love to burrow in his bed is Chad!

Chad the Stud likes the chill season and he likes sleeping while tucked under a blanket when it’s really really cool. He’d put on some music fit for the weather like Bump and Grind by R. Kelly. Chad the Stud surely knows how to heat up a cold morning.

The rainy season in the Philippines usually ends at February, with January being the coolest month brought by the winter monsoon. So better heed Chad the Stud’s advice on how to have a great time. Prepare some hot choco and good music and remember what Chad; “Have someone to hug, hold, embrace, and cuddle with”.

Nothing will go wrong if you believe in the words of Chad the Stud, the man who can keep you cool on a hot day, and keep you warm on a cold night. Catch Chad the Stud every Mondays to Fridays during the Midday Vibes 10am to 2pm. Only here at the rhythm of the city, Y101, ALWAYS FIRST.