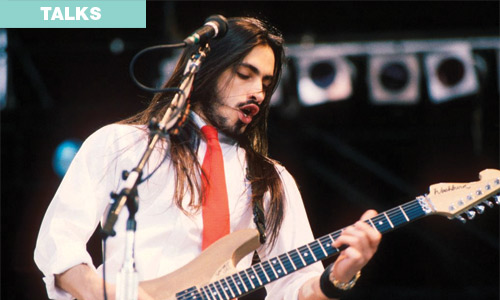 Shining brightly under the spotlight, these axe players are proof that pure talent can knock you right off where you’re standing. They may not be all household names and their posters may not be on your walls, but that doesn't diminish their chops one bit.

The master of dynamic and technical guitar playing, Paul Gilbert has been voted fourth-best on GuitarOne magazine's "Top 10 Greatest Guitar Shredders of All Time". Best known for being the co-founder of the hard rock supergroup Mr. Big. Gilbert is also known for his sick shredding ability in his solo work. He is noted for his hand speed and stylistic versatility, particularly for his efficient, staccato-like picking technique: playing extremely complicated passages of music at blindingly fast speeds.

While he may have played alongside Frank Zappa, Whitesnake, and others, Steve Vai built his reputation based on his own merits. In fact, he altered our views about the way a guitar can and should be played and made us believe the instrument can sing. As one of the few true instrumental virtuosos, he broke new ground and influenced an entire generation of shredders in the process.

Rhoads exploded into the heavy metal universe after giving Ozzy Osbourne’s music a new lease on life. Though Randy Rhoads’ time with the Prince of Darkness and Quiet Riot before that was brief, the classical guitar devotee left a legacy that is unparalleled to this day. Despite his short 25-year life, he’ll always be remembered for his ability to make a whole lot of noise with just a few guitars and special effects.

You may know the acoustic ballad More than Words, but that doesn’t mean you know Nuno Bettencourt. This Portuguese/American guitarist drew influence from Eddie Van Halen, Jimmy Page, Prince, and Al Di Meola, all of which filtered into Extreme’s “Van Halen-meets-Chili Peppers” sound. Nuno’s fast, slick shredability and fretboard tapping has been recognized by the Washburn Guitar Company who produced a series of guitars suited for him. Nuno is also known for touring with Rihanna and providing the guitar solo in Kiss it Better. Check out Nuno’s sick solo in 2:49 mark of Get the Funk Out.

This guy doesn’t need any introduction.

John M insists that these five legendary guitarists he chose do not demand attention, but you can not help but marvel in awe of their performance.

“These are guitar players who do not show up for attention, but you can not help but notice them by their irresistable playing”., the Afternoon Drive host said. “They are unique in such a way, that they are very tasteful to me. These guitarists do not play for flash, they play for feels. They play pure and inspired mood-driven riffs.”.

Catch John M every 2:00pm to 5:00pm Mondays to Fridays on the Afternoon Drive. Only here at the rhythm of the city, Y101, Always First.