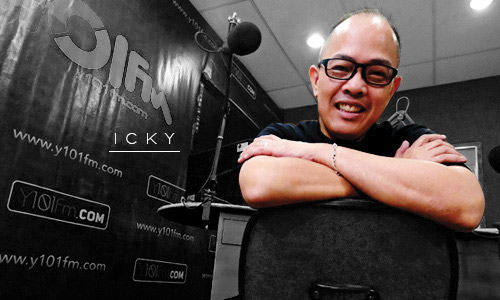 And no, it’s not because his colleagues find him “icky”...

Radio jockeys have always used a nickname on air. Some of them sound very unconventional and whacky, like “Jack the Wack”, “Johnny Kawa” or “Chad the Stud”. Other cool names from the Y101 archives include “Mr. Steel”, “AL B URO” – (pronounced as Albee Euro), “Prof. Noodles” and “Dr. Love”.

It has been a long tradition in the radio industry to give jocks unusual screen names so that they can stick out and their names can become memorable. Like who couldn’t forget that mellifluous and catchy name Jiggy has.

These tradition of unusual radio names goes back to the 50’s and 60’s with legendary American jocks like Big Bopper, Big Daddy, Wolfman Jack, and Hy Lit. It has thought that these jocks were given cool nicknames so that it will keep kids from looking up their real names in the phone book and calling them at home.

So why that name? Who gets to choose them? Icky says it depends on the radio station. They can give you a nickname that you won’t even like, or they can choose to let you use what you want.

Before he was called Icky, he was called Barney. Y101’s weekend radio host used to jock for a rock radio station during the 90s, and he was given the name Barney, which he didn’t even like. He said that some of the people he knows still call him such.

But Icky’s nickname has always been Icky since his childhood. His real name is Frederick, and when he was young, people would call him “Ricky”. “But I couldn’t pronounce the letter “R”,  so that’s why it’s Icky until it stuck.”