What does “Pit Señor!” actually mean? 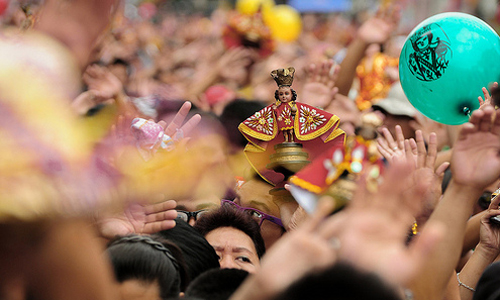 This article, written by our very own Mike Solo, was originally published in 2015.

The Sinulog, an annual cultural and religious festival held every third Sunday of January in Cebu City, is the center of the Santo Niño celebration in the Philippines.

It commemorates the Cebuano's acceptance of the Christian belief; particularly Roman Catholicism, as well as the rejection of their former pagan beliefs. The first of these conversions happened in 1521 on the island of Cebu; when Rajah Humabon and his queen, Amihan (Humamay) were baptised along with their subjects, becoming Carlos and Juana of Cebu.

One of the main highlights of the Sinulog festival is the day-long grand street parade, going on for 9 to 12 hours. The first Sinulog Dance Parade materialized in 1980, through the concerted efforts of a group of influential Cebuanos, with special mention on David Odilao, who is recognized as the father of Sinulog, and then Cebu City Mayor, Honorable Florentino Solon. The first Sinulog Street Dancing Parade was composed of students from different schools of Cebu City. A big number of contingents, not only from the different towns and cities of Cebu, but from the other provinces of the Philippines, avidly participate in the festivities to dedicate their dance to the most beloved Sr. Santo Niño.

After 35 years, the Sinulog event is still the biggest highlight of the year generating a big chunk of local and international tourists, and business opportunities for locals here in Cebu. As the years go by, however, the celebration has become more commercial, and less of a religious event.

Every year, people veer away from the real reason why we go out there on the streets. People today join in the revelry and make Sinulog a perfect excuse to get wild and wasted. There is no need to elaborate what this means since this is quite evident in today's social media posts. I don't want to be a party pooper; I would still like to party and have fun during Sinulog, but not to the extent of reverting to our pagan practice of long ago. It is quite ironic since Sinulog is a commemoration of our Christianity.

Nonetheless, I am hopeful for I still see families together watching the Sinulog parade. I hope that while they are there, they would also teach their children why we shout out Pit Señor! For those of you who dont know, the phrase means "Sampit ni Sr. Santo Niño".

We celebrate Sinulog in honor of Cebu's patron, Sr. Santo Niño. I would like to see Sinulog celebrated for many more years to come, as we gather as a people to honor and give thanks to the child Jesus for his blessings and protection of Cebu, and the Cebuanos. Pit Señor everyone!
Twitter