What caused the fire at the historic Notre Dame Cathedral in Paris, France? 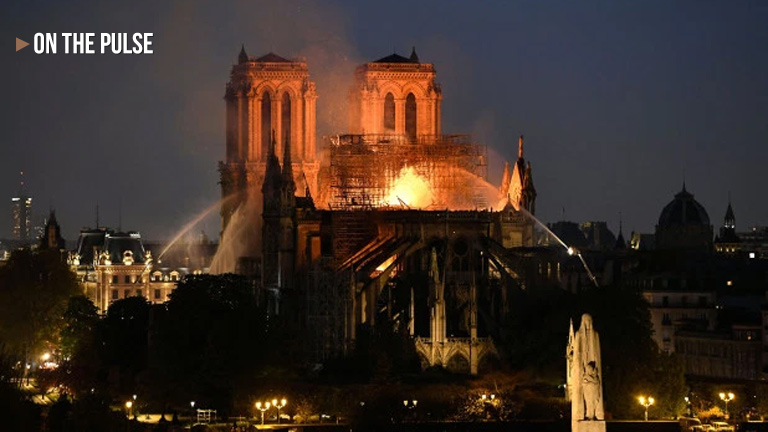 The Notre-Dame de Paris Cathedral, (Our Lady of Paris Cathedral), was first built in the 1160’s. It is considered a masterpiece of Gothic architecture and has been a symbol of Paris for more than 800 years. King Henry VI was crowned there in 1431. James V, King of Scotland, married the French Madeleine inside the cathedral in 1537. The French writer Victor Hugo immortalized the site through his novel “The Hunchback of Notre Dame” which was later adapted as a Disney movie in 1996.

Along with the Eiffel Tower, the Notre-Dame Cathedral is the most visited site in Paris, drawing around 13 million visitors each year. Generations of people marveled at the Gothic architecture that features menacing gargoyles and innovative buttresses that support its foundation. Inside is even more impressive with its invaluable treasures including the pipe organs that date back to the medieval period. The Notre-Dame is thought to be a lasting symbol of beauty that withstood the test of time having existed since the 1100’s.

The beautiful Notre Dame Cathedral. The monument’s history, art, and iconic architecture is irreplaceable. The people of Paris, France, and Catholics around the world are in our prayers.?#NotreDame (Photos by Oliver Wong) pic.twitter.com/DN7tKBLd3Q

I was at Notre Dame last November and it is one of the most beautiful buildings I've ever stood in. Heartbreaking the damage it's experiencing now. pic.twitter.com/CWyFIW3SwV

This morning, (late afternoon April 15 in Paris), the historic landmark was engulfed in fire which caused its roof and the iconic spire to collapse to the ground. After burning for more than 5 hours, officials declare that the church’s main structure had been saved after firefighters prevented the flames from spreading even further.

The cause of the fire is still unknown but reports say that it most likely started in the cathedral’s wooden interior, which of course is now gone. Monsignor Patrick Chauvet, the rector at Notre Dame, also said that the cathedral’s wooden frame is most likely the source of the fire. It is primarily consisted of oak, and it is built there to support the lead roof. The wooden frame contains beams that date as far back as 1160.

Thank you so much; I had not seen those. I hope that the rest of the vault will hold; it's a shame to loose the spire and the wooden frame but to loose the entirety would be devastating. Thank you again for the good news! Notre Dame's beautiful frame: https://t.co/WFeQK8jbFC pic.twitter.com/RViFuMLpTQ

Wow, they're just getting water on the Notre Dame cathedral now. That's crazy. The entire wooden frame is on fire and it's expected to be totally destroyed. #notredame pic.twitter.com/r4N93yiQQf