The David Bowie classic gets a trippy remake.

Amrican psychedelic rock band The Flaming Lips released their newest single, a cover of the late-great Bowie's Space Oddity performed and depicted in a trippy fashion. In the video, you can see a pair of nuns popping pills while the band performs in a church filled with white balloons as guests. If you're a fan of the psychedelic culture from the '60s to '70s, the band's latest release resonates well. 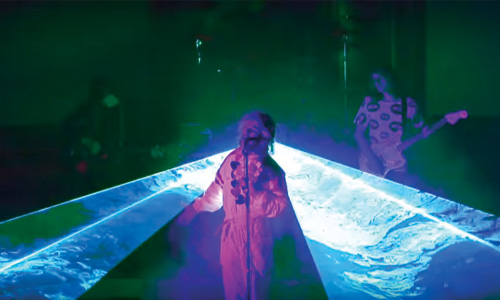 In a way, musically speaking it reminded me of Pink Floyd's first album release, The Piper at the Gates of Dawn. I haven't been a fan of contemporary psychedelic rock bands in general but the Flaming Lips is worth looking into if you want to look for fresh atmospheric hits. Known for lasers and trippy effects, The Flaming Lips music video looked really cool as the lasers hit the church-going balloons.This video seems to be the ideal full-blown tribute to Bowie, and a Eulogy to his life and his style in the music scene that made such an impact on various generations in the music, art and fashion industry. Despite being low-budget, artistically speaking, the music video nailed it.

The band has been on a Bowie tribute spree and their cover did the late Black Star some justice. Essentially, both the song and the video contain moments of joy alongside moments of mourning. The group first covered the track during an eight-song Bowie tribute they performed February in Aspen. The Flaming Lips were originally scheduled to perform their rendition of Space Oddity on the March 30th episode of the Late Show With Stephen Colbert when the band was in New York for the Music of David Bowie tributes.

In addition to the just-released video, the Flaming Lips have released Space Oddity as a single-track now available for download on both iTunes and Amazon.