The Bootleg Beatles: Closest Thing to a Beatles Concert 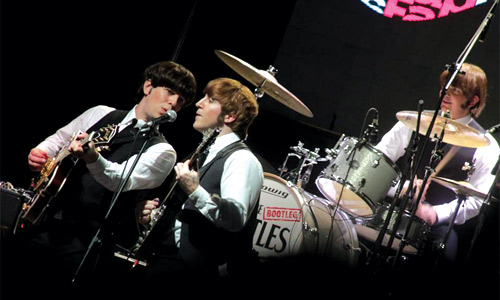 You could actually believe that your mind was playing tricks and you were watching the real thing and then, realising of course, that that was impossible!

For those of us who never had the rare privilege to see The Beatles perform live, and especially to those of us who were born a few decades late, tribute shows are the closest we'll ever get to experience the magic the legendary Liverpool foursome created onstage. While the Fab Four only engaged in concert appearances for a short segment of their brief ten-year group career, their astounding catalog of recorded music far surpassed their years as a live performing unit.

Having been a die-hard Beatles fan since I can remember, what struck me the most during The Bootleg Beatles concert at the Waterfront Hotel Cebu was that I could actually hear and enjoy what they were singing! The sound was terrific and really authentic and excellently re-created on stage without ever having to be exaggerated. I like how they mimic The original Beatles’ look, the accents, the body language and mannerisms and even to the littlest details like how Adam Hastings, the spitting image of John Lennon who also strikingly sounds just like him, chewed a piece of gum during their performances just like how Lennon would usually do when performing live.

You could actually believe that your mind was playing tricks and you were watching the real thing and then, realising of course, that that was impossible. You couldn’t help but appreciate The Bootleg Beatles and their talents for recreating a Beatles experience without making a parody of it. It was a truly FAB evening, full of nostalgia, even for those people who hasn’t live a day in the 60s. I loved the way they worked through each of The Beatles' phases and the visuals accompanying each one. Although they obviously can’t replace the real thing, they are of course, at least in my opinion, a worthy representation.

Although the crowd was being less enthusiastic that I expected, (understandably, as they were mostly from the over 50 demographic), I still managed to enjoy myself and immersed in what it would really be like to be at a Beatles concert. The Bootleg Beatles concert was the closest thing we could ever have to seeing the real deal. I would certainly love to see the tribute band again!