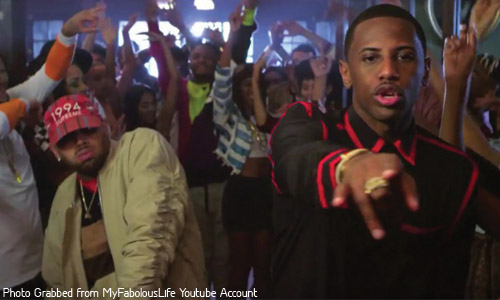 Take it old school with this new track.

The video starts off as something that would remind you of the classic TV adaptation of Goosebumps as it opens the door to the party. Fabolous and Chris Brown’s track with the OG Project She Wildin’ is a tribute to cult favorite House Party which was released back in 1990. Brown taps his inner Kid and Fabolous bringing out his version of Play, both performers take viewers on a three-minute journey of 90’s nostalgia but injecting the modern dab move. Kicking off the iconic battle scene, Breezy and Fab dab their way to the dance floor. They show off their sexy moves, much to the delight of the ladies in the room. It’s a hot song and a perfect one to jam to in the club.

Fabolous was supposed to release his The Young OG Project 2 album in time for Christmas but plans have changed and decided to drop the music video for She Wildin instead which was the last track off his previous album, The Young OG Project. Brown on the other hand paying tribute to classic moments in film is also not something new. The singer was also featured in Big Sean’s Play No Games video, which remade the Martin sitcom, as well as the Ayo video which featured a nod to The Notorious B.I.G.’s Mo’ Money, Mo Problems video.

The Young OG Project 2 will now arrive around Valentine’s Day. “I decided to release it in February at Valentines Day/Weekend for a few reasons… 1. I ran out of time for my sample clearances,” explained Loso. “The difference in these projects being digital & not Mixtapes is that I have to clear the samples & some take more time than others. We have a good collection of songs & features so I would hate to lose music from the project because we were rushing to just make Christmas.”