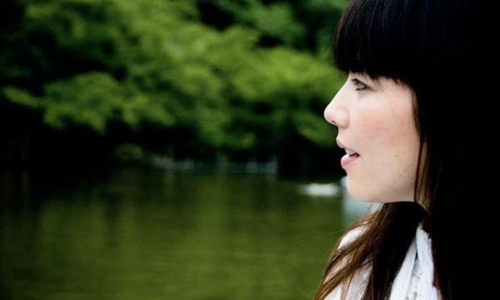 She’s not another pop princess;  it’s something she was groomed to do but instead of following the footsteps of her famous older sister, J-pop Idol Olivia Lufkin, she turned the offer down and  took the different path to do what her heart wants to do.

She wrote, performed and recorded her own songs and was asked to sign up for Temporary Residence Limited after sending a demo.

She made the right decision. Her music is something you do not hear often and it is what makes it special. Of course, she is not as famous as her sister, but Caroline is making a name in the world of ambient electronica/experimental/ minimalistic world. She currently has two albums: Murmur’s and Verdugo Hills. You may see that the album looks “empty” compared to the album covers of stars we see today but it pays not to judge it. There is always something good in simplicity so once you listen to what is inside; you will feel the sense of peace and love with the little child-like vocals and instruments that embrace your soul – magical and haunting.

Both albums are different but at the same time identical. Caroline doesn’t need to prove her place in the scene; she already won it. Caroline stands out among the furnished images and pop music scene we see and hear everywhere. You have to hear her to believe it.

There’s nothing better than having Caroline Lufkin’s songs to listen to when it’s raining, making you remember the times when you were a child – happy, in love and careless. Caroline hypnotizes us to a dreamy state which takes us away from the natural world. The awareness of space and time dissolved, leaving us with closed eyes and a smile on our faces.