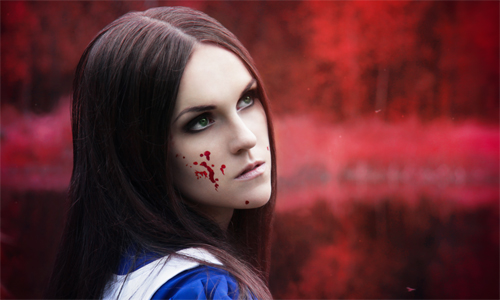 Welcome to the twisted world of Alice.

Years ago, Alice’s house caught fire which took her family away from her. Being the only survivor, she went mad and was confined to Rutledge Asylum where she faced her demons. Ten years after, now an adult in her late 20’s or early 30’s, she was finally granted a release but such release did not guarantee her a reason or an explanation of the tragic event. She may seem to live a normal life but deep inside, she continues to bring the heavy memories of what happened to her family.

She never ceases to stop trying though, good thing she has her wonderland in her head. She goes there whenever she wants to and it is handy in situations like these since the real world is too tough – ill-mannered people, prostitutes, gamblers and the likes, they cannot solve her problem.

Something’s destroying wonderland and she has to save it before she loses it; her only safe house from the cruel world. It’s up to her now. She has to fight whatever evil was destroying her wonderland or else she might lose her mind too.

Enter Alice’s mad world and solve the puzzle little by little as every progress will reveal a part of her memory. She needs to solve the case of the fire that mysteriously took her family away from her.

This game is highly recommended to people who love a good story and action. The gameplay is even better than God Of War so don’t be fooled by our mad star’s looks. This game will keep you glued to your screen. As a starter, you may play with the easy level and progress with nightmare once you think you are good enough. The soundtrack is incredible! It matches the feel, and gives a hint of Alice’s childhood.  I would not recommend this to kids though. The language and story is intended for an older audience.

This game deserves more credit than it did on the ratings it received. It is one of the best games ever! Great gameplay, great graphics, great story. Alice Madness Returns is perfect.