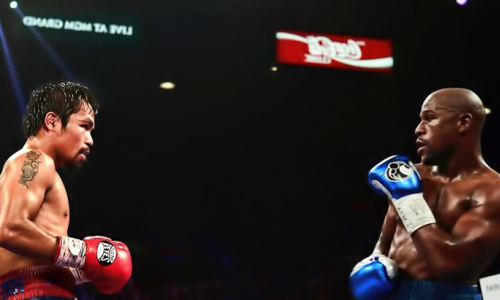 Boxing fans or not, everyone was tuned in to the fight of the century.

It took 5 years to make this battle happen. Everyone was excited about it and couldn’t wait to find out who really was the pound for pound king.

I watched the fight live in the Y101FM station. Everyone was getting ready, and all they could talk about was the fight. As soon as the undercard finished, I was sitting at the edge of my seat already and watched how everyone settled down gluing their eyes to the screen. I felt nervous as they focused on Pacquiao and Mayweather preparing for the fight. Every time Pacquiao showed up on the screen, all you could hear was cheers erupting inside the Y101FM station. It was definitely a huge day for everyone.

When the fight started, all I felt were chills and goosebumps. Of course, I was rooting for Pacquiao the whole time. And whenever Pacquiao got to score some punches, I couldn’t help but jump off my seat and cheer like I was in the arena. But to be honest, I expected a much intense fight from Pacquiao and Mayweather. I expected for more punches to be thrown compared to what actually happened during the fight. It was quite obvious that Pacquiao really wanted to throw in more jabs, but couldn’t because as what you may have witnessed during the fight, Mayweather had his evasion skills at the ready. You could really see Pacquiao’s aggressiveness and how much he wanted to knock Mayweather out. Round 4, for me, was the greatest round out of all the rounds as Pacquiao landed a big hit that sent Mayweather to the ropes. Unfortunately, Pacquiao wasn’t successful in keeping Mayweather in his pockets throughout the fight.

It was sad to say that Pacquiao lost the fight. And it was terrible to see how Mayweather acted like he was a king. From what I see and read on social media sites, Pacquiao really won the people’s hearts. Even celebrities couldn’t help themselves to express how they felt about Pacquiao losing the fight because I’m sure they knew who really deserved to be called a champion.

At least we know that Manny “Pacman” Pacquiao is truly the greatest champ of all time. He is the bravest, fairest fighter and athlete I’ve known. I would wish for a rematch, but I hope in the next fight, it will all be fair.