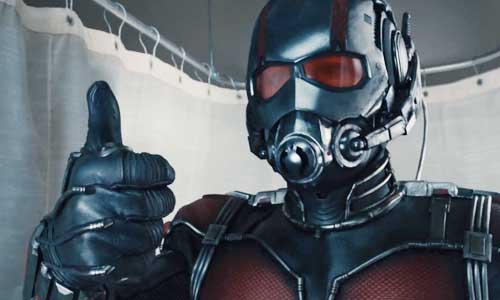 What would you do if you suddenly shrunk into this tiny little human being and seeing the world 100x bigger than before? I am guessing that most of us would not live for long as we get squished by a shoe a minute after we turn into an ant-sized person.

This is because we are not as skilled as the Ant Man, played by Paul Rudd.

The first time I saw the movie trailer, I thought it would not be as good as the other Marvel superhero movies. First of all, I thought Paul Rudd was not fit for the role as I am used to seeing him in romantic comedies or drama movies like for example, Horrible Bosses or Wanderlust. I thought watching him as a superhero or as a part of the Marvel team was a bit off for me. And second, an ant? I thought an ant superhero was delusional and a bit gross. I thought to myself, don’t they have any cool ideas for a movie anymore? All I had were negative thoughts about Ant Man.

Maybe you are wondering why I watched the movie even if I thought undesirable about it. To cut the story short, I was convinced to watch it.

Watching the movie was like drinking caffeine as I was not, at any point, close to yawning. Paul Rudd was more than fit for his character – also physically. A lot of laughter was heard inside the cinema as the movie kept rolling. The storyline itself was amazing! Although, if you are disgusted by ants or hated them then this movie is definitely not for you. But you can always try to watch it and overcome your fear. The legendary Michael Douglas, playing as Dr. Hank Pym, was also super cool being the boss of all ants. And of course the villain in a suit, Darren Cross or the Yellowjacket (played by Corey Stole), was superb.  In general, everything was amazing!

I think this movie is spectacular. I do not regret paying Php 210 for a movie because this one is definitely more than worth it. If you have not watched Ant Man yet, then you better buy a ticket now and not let this one pass by.

Reviews and impression on Say What?