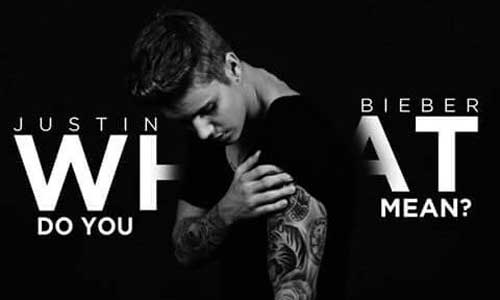 "What Do you Mean" is the latest hit single of the multi-talented young man, Justin Bieber.

We can all remember those days when his songs still sounded pretty childish but that was when he was still also a kid, inside and out. But now, it's clear that his music is also growing up with him.

Justin Bieber's recent songs surely makes most JB haters turn into Beliebers. Reasons for that? First, when he admitted he had been quiet immature for the past years and apologized for that on the show, Roast. Second, his music is turning into pure gold. And third, how he shows that he can also love hard (despite accusations of him being a womanizer) by still showing his feelings for his ex, Selena Gomez, through some of his songs and music videos.

If you haven't heard and seen the music video of "What Do You Mean", click the link below.