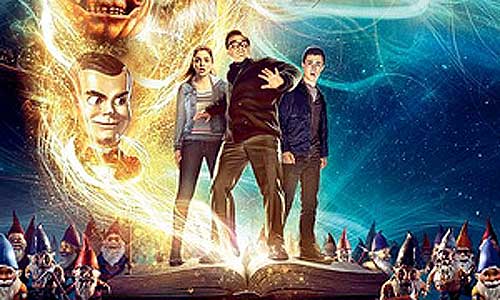 Zack (Dylan Minnette) and his Mom move from New York to Madison, Delaware not long after his Dad dies.

The house that they moved in is right next door to a very suspicious neighbor, but Zack meets the neighbor's daughter, Hannah (Odeya Rush) and shows him a really cool abandoned amusement park.

On Zack's first day of school, he meets a kid named Champ (Ryan Lee). Later that night, Zack hears Hannah screaming next door and he calls Champ to help him check it out. Champ thinks he's coming over to meet girls and his reaction to finding out he's been asked to help save Hannah is very funny. They sneak in and that is when the adventure begins.

This movie has many awesome Goosebumps characters including Slappy (aka the Living Dummy), the Invisible Boy, the Haunted Car, the Abominable Snowman, Werewolf of Fever Swamp and the Blob that eats everyone.

The special effects and cinematography of this movie are amazing. The monsters look great and details were on point. They really look very true. Director Rob Letterman have excelled at making a movie that is true to the books. The acting was also perfect. The characters react like some one really would in a similar situation.

Goosebumps is a very good movie and will surely be enjoyed by people with different ages. You should definitely give it a watch especially now that it is still showing in the cinemas!