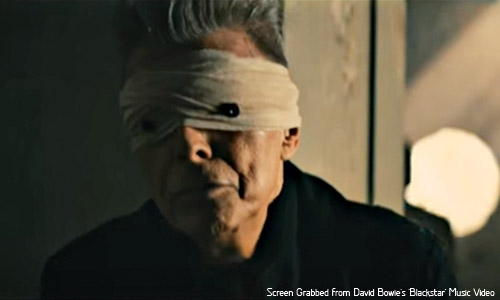 David Bowie once again sets the standard by releasing one of the strangest, and out there music videos of today.

That’s what he has done for Blackstar, the title track to his new album out on January 8 which is also in time for his 69th birthday. Premiered last Friday, the ten-minute music video-slash-short film is a reflection of what the artist has been known for years- striking imagery and a fluid musical style. Over the years, fans can attest to his ease of transition between theatrical, hard rock and heavy metal, soul, psychedelic folk and pop. For months the multi-instrumentalist’s album was already the subject of speculation among fans and critics. Set to release 7 songs, the single will also be used as the opening music for the action-drama television series The Last Panther.

The idea behind Blackstar is said to be inspired from a star in our universe called KIC 8462852 and gives us an idea on the potential life forms and structures that revolve around it. Upon seeing the video your first impression would have it being a bit similar to the movie Interstellar. By definition, the video introduces us to events that theoretically can occur between the universe’s stars. Lyrical-wise, my personal understanding of Blackstar would have to take this a metaphor on everyone’s journey between non-conformity to being a hero and being apathetic. A paradigm-shift, if you may. The way Bowie performed in the first few minutes of the track is reminiscent of today’s electronica but still maintains a hint of the performer’s theatrical influences. The song then shifts into a playful funky vibe which makes the track less alienating from the way Bowie performed back in the 80’s.

Here’s a fun fact about the song: In an interview with Rolling Stone, Bowie’s long-time producer Tony Visconti shared,

“We were listening to a lot of Kendrick Lamar. We wound up with nothing like that, but we loved the fact Kendrick was so open-minded and he didn’t do a straight-up hip-hop record. He threw everything on there, and that’s exactly what we wanted to do. The goal, in many, many ways, was to avoid rock & roll.”

So if you want to take a break with today’s music scene that’s saturated with EDM and pop star feuds, David Bowie’s Blackstar is a thought-provoking and promising piece.