By now you know Blink 182 has officially made a comeback and they just dropped the music video for latest single Bored to Death sans long-time guitarist and co-frontman Tom DeLonge. This is a part of their upcoming album release called California and it feels weird without him but Blink has maintained their signature base and drum sounds respectively which still makes it a big thumbs-up from us. 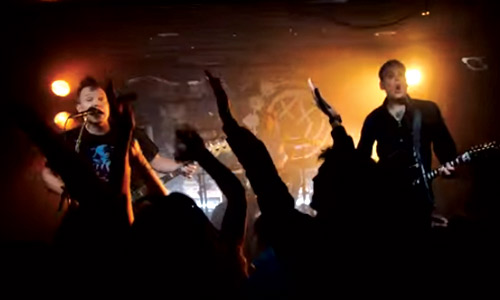 So let's jump right in- The music video is the usual scene where the boys perform in front of the audience while a high school kid dreams of the beach, sneaking into pools and rocking out with the chick in fishnets of his dreams. In this one, the new member Matt Skiba is also introduced. Skiba is also a co-frontman of the band Alkaline Trio. For some reason, he's sporting DeLonge's haircut from several years back so maybe that's partly the reason why we don't miss him too much in terms of sound and aesthetics. What I do like however is that the band's style has reached maturity and while it may have a contemporary spin to it, Blink 182 has maintained its distinct style which differentiates itself from what we hear from today's bands (Seriously, who could top Travis Barker). A lyric of the song sings, "It's a long way from 17," and indeed it is.

I know what's still on your minds- what happened to Tom? Well, in an interview for Mic, he shares that he's still facing a 'national security issue' regarding UFOs. "When you're an individual like me," Delonge shares, "dealing with something that's a national security issue, and you're being gifted with the opportunity to communicate something you've been passionate about your whole life — something that has the opportunity to change the world over time — being a small part of that is enormously important for my life path. But I can't do everything. I can't tour nine months out of the year with enough time to do the enormity of what I'm setting out to do." Either that or he smoked something real good. Early last year, Mark Hoppus and Barker claimed that DeLonge's manager confirmed that he "didn't want to participate in any Blink-182 projects indefinitely,"

So while DeLonge is on a journey exploring the extraterrestrial dimensions, the rest of the boys of Blink 182 may be Bored to Death here on earth but this first track is definitely promising. I'm sure most of you are reminiscing the good old days of wishful thinking during monotonous days in the classroom now with the boys back in the charts. California is set to release on July 1st and this includes Rabbit Hole and the 14-second piece Built this Pool which the band previously premiered on a 10-hour loop.