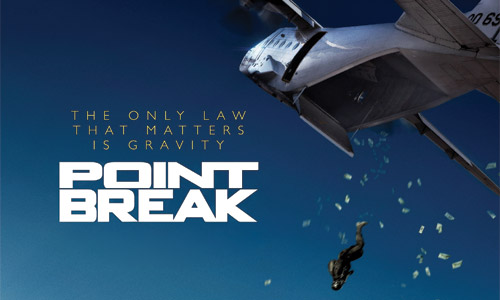 Me and my partner recently availed SM’s ePlus card and one of the perks was free movie passes to SM Seaside’s Director’s Club.

We decided to give it a go and one of the movies available was Point Break which was a remake of the movie back in 1991 which starred Keanu Reeves. I only saw the trailer prior to watching and the scenes seemed pretty intense. According to the movie’s synopsis, it’s inspired by the 1991 hit based on a young FBI agent infiltrates an extraordinary team of extreme sports athletes he suspects of masterminding a string of unprecedented, sophisticated corporate heists. Upon learning that this movie was a remake plus with intense scenes and effects it was something to look forward to. This action thriller starred Luke Bracey as Johnny Utah and Edgar Ramirez as Bodhi together with Teresa Palmer and Ray Winstone.

The story centralizes on FBI agent Johnny Utah, who is investigating a string of bank robberies possibly being committed by extreme athletes. Utah is a former motocross daredevil and was inspired to join the FBI after losing his best friend after a tragic accident. Utah goes undercover to infiltrate the surfing community and develops a complex friendship with Bodhi, the charismatic leader of a gang of extreme sports nuts. Apparently, their motivation was to complete the mythic Ozaki 8 which involved challenges that wanted to give back to Mother Earth. To be honest, I understood this only after reading about the movie.

Frankly, the storyline would have been promising but was not cohesively portrayed. Instead, I only saw the film as an extravaganza of stunts, special effects and blatant product placements. To be fair, the impressive snowboarding, surfing, motocross and wingsuit flying skills shot at several continents will surely take you at the edge of your seat and I would recommend this to extreme sports enthusiasts, a father-and-sun duo or those that have a spark of rebellion in them. All these distract you from the movie’s premise so if you’re up for the story, I’d suggest watching the original Point Break first.