Virtual Reality is the new way to experience anything.

It’s also by far the coolest. A three-dimensional simulation, virtual reality is built to be experienced through immersion. It is very different from just watching something on the screen. VR gives us the opportunity to interact in a computer-generated environment by using special electronic equipment like a helmet with a screen inside and gloves fitted with sensors. 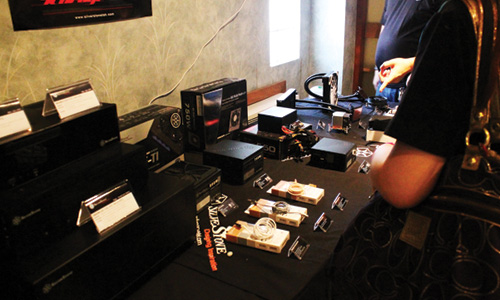 The Marketing Manager for SilverStone, Tony Ou, introduced the new line of products that the gadgets manufacturer is about to release. He introduced to us the new chassis (computer case) from the RAVEN series, called the RAVEN Z RVZO1-E. The new chassis is the evolution of the ground-breaking RAVEN Z RVZO1. The new model is a slim form factor case with tremendous capability. The new model’s interior was reworked to convert SFX power supply space into one for standard ATX (PS2) power supply. The new case can still support the biggest consumer graphics cards on the market with superb air cooling performance. The model were built to cool and be very silent at the same time!

Mr. Ou also introduced the new Primera Series with PMO1 that comes into two cases. The PMO1BR has a black case with red LED lights, while the PMO1WA has a white case with azure/blue LED lights. Primera is the Spanish word for “first” or “first class”. The series is designed for those seeking to build PC’s with rich feature set and trend setting aesthetics. The Primera chassis are made to look like supercars; high performing and very stylish.

The highlight of the launch would be the introduction of the virtual reality equipment. The CEO of Fine Upgrades, Ryan Yu, promoted the oculus rift and said that the use is not limited to gaming. VR is good for kids cos they can move around and are able to get physical benefits from it. Pilots use VR for flight simulation and in the UK there are virtual grocery stores, where you can buy your groceries in the comfort of your living room. However, Yu and Ou said that the VR’s would only be available for purchase in August.

SilverStone is not just a gadgets store made for gamers. It also offers accessories for those people who have computer needs for office work. Fine Upgrades brought SilverStone to Cebu and has built computer equipment suited for the tropical environment of the Philippines.