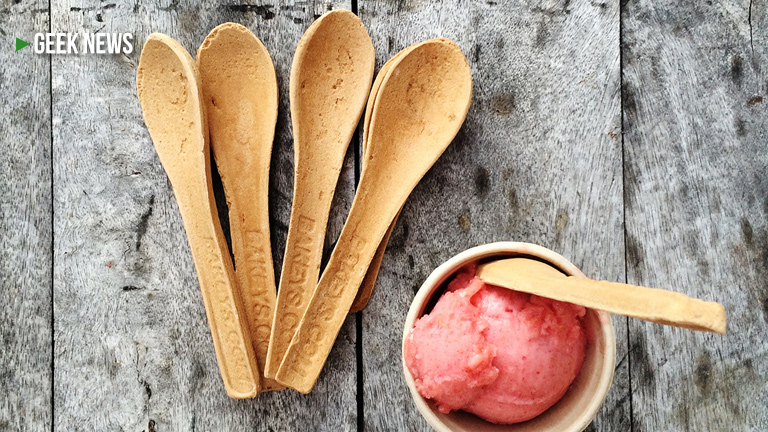 Plastic is a major environmental problem. It is The Philippines' top pollutant and a report from the Ocean Conservancy a few years back even singled out our country for wasting plastic the most. A majority of Filipinos throw their plastic bags in the trash right after they're done carrying them home. We've also been used to asking for disposable plastic utensils every time we dine at fast food restaurants. Unfortunately, we tend to forget how harmful these plastic products are. We throw them away and most of them just end up in the open sea, threatening precious marine life. Scientists all over the world are trying to solve this problem by coming up with different alternatives. One unique idea is edible cutlery.

Bakeys is a company in South India who has come up with an alternative to disposable plastic utensils by making ones that you could eat instead. The edible cutlery, invented by Bakeys founder Narayana Peesapaty in the early 2010's, are made up of dough held together from a mixture of sorghum (batad), rice, and wheat flour and are flavored with different options including vanilla, cinnamon, and mint. Peespaty's goal is to eradicate the usage of disposable plastic spoons and forks by providing the masses with a tasty and nutritious alternative.

With a shelf-life of up to three years, Bakeys' edible cutlery can be used to scoop out stew and stir hot tea and the edible spoon would not get soggy and break. Someone using the edible spoon can have the option to eat it or throw it away. Even if discarded, the edible utensils will decompose within five to six days, if not eaten by insects or rodents. The company also provide edible forks, dessert spoons, cups and plates which you can buy online through any e-commerce site or on Bakeys' official website.

Edible cutlery is considered by many as the future of eco-friendly alternative to plastic utensils. It is a very creative and healthy way to help save Mother Earth.