The oldest OS runs on the latest tech trend to date.

For some reason, developers can't seem to resist taking classic games and apps and putting them on platforms that they were never meant to run on. While everyone else is enjoying their new Apple Watch, developer Nick Lee made the impossible happen by fitting the classic Windows 95 OS on the smartwatch! 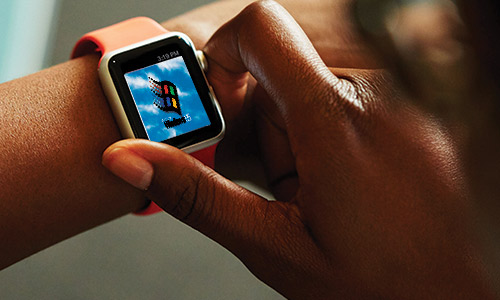 In a blog, Lee expresses that the Watch has the same specs that of a typical computer back in the day, "With a 520 MHz processor, 512 MB of RAM, and 8GB of internal storage, the Apple Watch packs a lot of computing horsepower into a very small package. On paper, its processor alone is about twenty-five times faster than the average 386, and 512 MB was the size of a hard drive in the mid-nineties, not memory." The interface is incredibly miniscule, of course, but it works. While you don't have a true mouse pointer, you can use the touchscreen to navigate the Start menu and open apps.

The tech genius shares that this isn't the first time he installed the OS on other devices and explains the process below:
{YOUTUBE}Nas7hQQHDLs{/YOUTUBE}

The result is very slow, but impressively functional as your finger tap can function as a mouse. Of course, there are quite a few hurdles to get past first, including the fact that Apple doesn't exactly provide a way to install new operating systems on the Watch, let alone desktop apps. Just don't expect to relieve the days of the likes of MSN as it takes up to an hour for it to boot. Lee even rigged a motor to keep touching the crown so that the watch screen wouldn't shut off after several seconds. If you want to try it yourself, Lee says to get the code from GitHub and explains, "You’ll need to source the files that show up in red yourself — they aren’t redistributable." So what do you think about this new discovery? Share with us in the comments section!