The real reason why this bicycle has a large front wheel 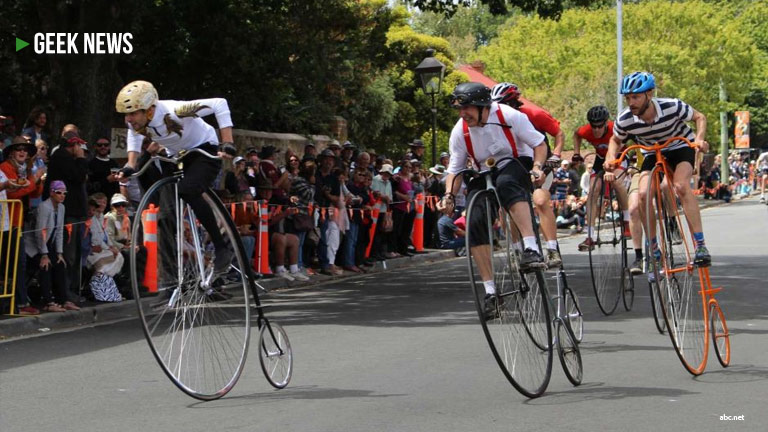 The penny-farthing, also known as the high wheeler, is a type of bicycle with a huge wheel in the front and a much smaller wheel in the rear. It was very popular in the 1880’s and 1890’s and it was the first machine to be ever called a "bicycle". Here’s everything you need to know about this old-timey bike:

Why is it called penny-farthing?

The name penny-farthing comes from the British coins; the penny and the farthing – one much larger than the other. For most of its popularity in the 1880’s, the penny-farthing was simply known as “bicycles”. In the late 1890’s, people started to call it “ordinary” to distinguish it from the emerging new bicycle types.

How do you ride it?

You mount the penny-farthing by putting a foot on the step above the back wheel. Then you push the bike off, then climb it up towards the pedals as it moves away. Like so…

Why was the front wheel so big?

Physics. The penny-farthing didn’t use gears, so the only way to go faster was to have a bigger wheel. Pedals were directly attached to the front wheel, so the bigger the wheel, the further a single pedal push can propel you.

Another reason why the penny-farthing uses a large wheel is that to keep the rider comfortable. Back in the olden days, the roads were in poor condition, and the large wheel of the penny-farthing could roll over potholes and small rocks. It led to a smoother ride than smaller-wheel bikes, which were often called bone-shakers.