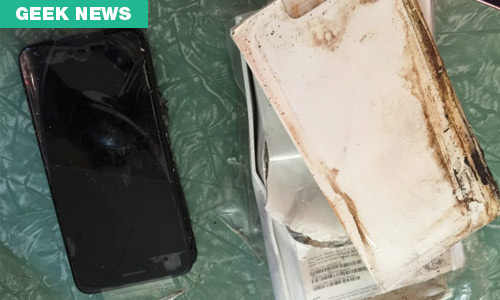 Yup, even the iPhone 7 has exploded.

Apple has often been accused of copying Samsung's flagship model features. Apparently, Apple couldn't let Samsung get away with the limelight on them so they made their iPhone 7 explode too. But according to reports, it's definitely isn't battery related as the phone exploded while in transit. When a customer received the iPhone he ordered and took it out of the box, the phone was already damaged. Its packaging is punctured, and the phone itself has a large dent on the back, indicating that the damage was inflicted with a physical blow. The burnt parts of the packaging indicate that the battery did catch fire at some point, but that sometimes happens to batteries when you apply a lot of physical force to them

It appears likely that the phone sustained some damage while it was being transported. The kind of battery used in the iPhone and other handsets are almost always safe, but can be incredibly dangerous – if they are punctured, they can easily explode or set fire, taking the rest of the phone with it.

As of this writing, this is merely an isolated case as Reddit user "kroopthesnoop" was the only one who reported this incident. "Something happened between the factory and delivery," is all the phone's owner had to say in his thread on Reddit. Apple hasn't commented publicly and neither has UPS, but one or both companies will likely have to investigate the matter when the phone's owner contacts Apple for a replacement.

But that also suggests that the new problems hitting the iPhone are not on the level of the exploding Note 7, which necessitated a global recall and has been a disaster for the company. No further problems with the iPhone 7 have yet been reported. So If you already preordered your iPhone 7 there's pretty much nothing to be worried about.