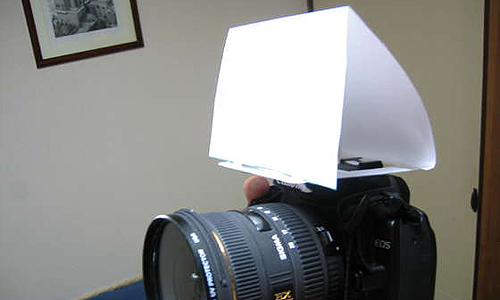 The biggest drawback of using the flash? The harsh and high-contrast light it produces.

If you want to make soft portraits, you have to make use of a diffuser. A diffuser spreads the light from a flash. As a result, the light will not come from one concentrated source (which produces the sharp and high contrast effect), but instead, the light will spread out, bounce from reflective ceilings and walls resulting to a softer and visually better photo.

There are a lot of commercially available diffusers—sift boxes, bounce cards and the likes. However, if you are short of cash or just feeling creative, you can make one from scrap.

A party bouncer card will enable you to get a less harsh flash effect that many flashes leave images with. It works by making the light bounce, and pushes the light in two directions which creates a nicely-lit image.

Wrap a tissue paper around the flash and tie it with a rubber band or tape it on, and voila! This works by limiting the light of the flash.

Get a semi-transparent sheet of paper or plastic and place it on the flash of your camera.

DIY diffusers are great for short term uses. However, not all DIY’s will be perfectly made and last that long compared to commercial ones. Either way, you can get the photo you want by diffusing the flash.

Be Geeky with Geek Chic!