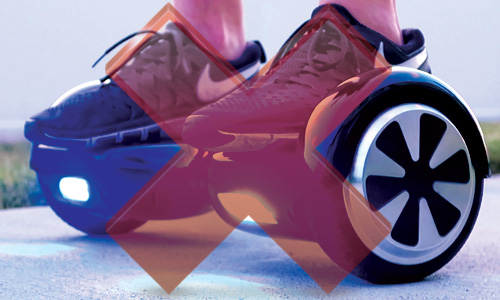 Hold your horses and forget about asking for a Hoverboard this Christmas.

After a series of hoverboard-related fires grabbed headlines, it looks like Amazon is taking action. According to Swagway, a major seller of hoverboards, Amazon has started questioning makers about their safety standards — and appears to be removing some boards from its store.

A spokesperson for Swagway provided this statement for an article published by The Verge:

Amazon just sent out a notice to all "hoverboard" sellers to "provide documentation demonstrating that all hoverboards you list are compliant with applicable safety standards, including UN 38.3 (battery), UL 1642 (battery), and UL 60950-1 (charger)."

Swagway already meets all those certifications and is happy that Amazon has decided to take steps to weed out the low quality boards. As safety is always on the forefront for Swagway, we're glad that this is taking place, especially in light of recent concerns with the fires with the poor quality batteries.

On that note, we're also in the process of working on measures, to help consumers identify between an authenic Swagway and the many imitation boards that are adding our branded logo to their unauthorized boards. Meanwhile, we ask that consumers only purchase from authorized retailers as an added precaution.

As first noted by Best Reviews, links to some hoverboards have apparently disappeared, including listings for Swagway boards and those of other companies like the popular Phunkeeduck. Models from Razor and Jetson appear to still be available, as well as some cheaper models, but it's currently unclear why that's the case.

There have been at least 10 reports of hoverboard fires in nine states in recent weeks, and the United States Consumer Product Safety Commission is actively investigating the situation. The issue has escalated so quickly that major airlines have announced they will ban the boards from flights. Prior to Amazon's move, Overstock.com announced this week that it would stop selling the boards amid safety concerns. Amazon has not yet responded to request for comment.

*Adapted from The Verge.