Who's going to drop Pacman next?

By now you're tired of all the debate pertaining to religion and sexuality that has tirelessly transpired in your social network newsfeed. While we want to distance ourselves from needless arguments, brands have started to distance themselves from Manny Pacquiao too. Nike has abruptly terminated their contract after over 8 years of sponsorship with a statement saying that the athlete's views were abhorrent. 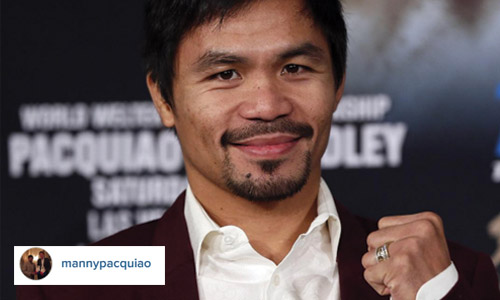 The two were just the beginning though as Nestle' as of this writing has also released a statement claiming that they have no current relationship with the boxer. Meike Schmidt, Corporate Spokesperson, told Gay Star Business: 'Nestlé is not a current sponsor of Manny Pacquiao. We had a one-time promotion with him in 2015, which has ended.'

More international groups are urging other sponsors such as Foot Locker to drop him completely. Although it wasn't too late to say sorry, these corporate bigwigs decided to knock out Pacman's pockets instead.

To be fair, it is quite admirable that the star stands by his beliefs and refuses to compromise just for the sake of popularity and votes for the upcoming national elections. Being a predominantly Christian country, several citizens still disprove of same-sex marriage and that's fine. However, this incident should be a lesson learned to everyone that we must be careful with our choice of words especially with sensitive prevalent issues pertaining to equality and discrimination of other sectors that a good percentage of the Filipino population and the rest of the world are up against. So what are your thoughts?