Hip-Hop royalty Kanye West is talking of course about the feeling he got after he performed in Manila last Saturday at Paradise Grounds in Aseana City, Parañaque.

Yeezy headlined the Paradise International Music Festival on 9 April 2016. The one-day spectacle filled festival featured international and local artists coming from a wide array of genres. Other international artists that were in Manila last Saturday were Wiz Khalifa, Afrojack, and Rudimental. 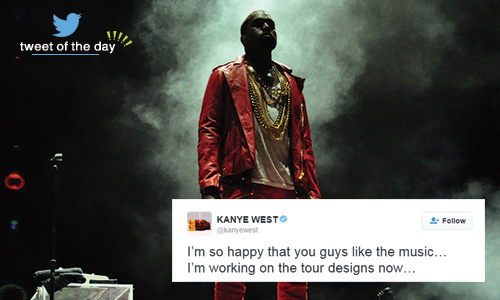 On that night of the festival, Kanye premiered his songs from his most recent album The Life of Pablo. West performed the first single off the album called Famous the opening line of which references Taylor Swift whose 2009 speech Yeezy interrupted. The song contains the line “I made that b-tch famous”

"You don't know. It's really overwhelming for me to perform that song for the first time and for y'all to react to it in that way. That I fought to make that the first single off of Pablo.”

In 2009, Kanye interrupted Taylor Swift during her acceptance speech and told her that Beyoncé deserved the award more. West revealed to his Filipino fans that what happened on the night of the VMA’s led to troubling events for Yeezy.

"This is the song that broke the writer's block for me coz it's something I wanted to say so bad that they told me I couldn't say. That night, when I went on stage was the beginning of the end of my life. Lady Gaga canceled the tour the next day. When I just said what everybody else was thinking,"

However, the rapper recovered from the incident and went on to release four more albums. With positive feedback from his Filipino fans towards the songs off his new album, Kanye is planning for tour designs for The Life of Pablo.