When she’s not singing and inspiring young girls everywhere, Taylor shakes things off in the kitchen.

Our favorite Bad Blood singer has taken to social media and posted her freshly baked cookies. She posted her sweets on her Facebook page with the caption “Hello baking, my old friend”. 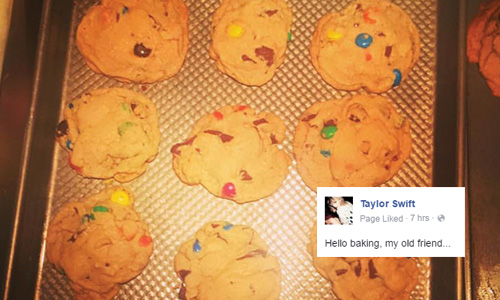 As a renaissance woman who likes cats and party planning, Swift has also an obsession with food. As proven by her Instagram regularly, Swift gets busy in the kitchen and displays her sweets creations on social media for her followers to savor for the eyes.

Taylor Swift likes to bake on scratch and experiments with her pastry-making. She follows food blogs and interacts with her fans on social media especially when fans ask for recipes. She has even been stated to be obsessed with Great British Bake Off and watches every episode.

Taylor Swift has definitely a sweet tooth so I guess it’s okay to go a little crazy for sweets sometimes.