Justin Bieber has been in the music business for over five years. Post Malone is a rising rap singer. The issue started when Bieber used Malone as an ashtray on stage.

The two singers were in Houston, Texas for an afterparty when things got out of hand. As seen on a video posted by TMZ, we see the rapper Post Malone performing his famous song White Iversion on stage. Clearly visible on stage with him is Justin Bieber who did a dickish move by pressing his cigarete – or some kind of joint-- against the arm of Malone like an ashtray. Malone wasn’t fazed and continued to sing his hit song while Bieber quirked a smile and danced high. 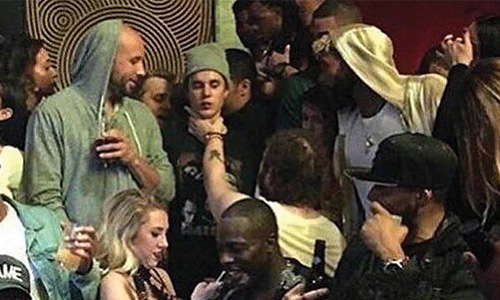 At some point after the incident, Malone approached the Sorry singer in the VIP section and what happened next became a trending picture of Malone choking Bieber.

Bieber fans were worried after the picture circulated over the internet. In the picture Bieber looked startled as Malone’s arm (the very same arm Bieber used as an ashtray) stretched out to reach Bieber’s throat.

However, Malone spoke out to Twitter and said “He's my big brother and we like to rough house. If we was fighting someone would have done something instead of just sit around while the biebs gets chokeslammed”. He continued on another post “End of story I love jus more than life and the mixtape is on the precipice of release. God bless my fans (sic)."

On Wednesday Bieber posted on Instagram a picture mocking the incident. Rocking a red bandana and a fierce look on the face, Bieber stretches his arm and chokes Malone, while Malone shows a cartoonish surprise look.