In 2009, Usher signed a teenage YouTube star from Canada to his record label. The then 13-year old kid grew up to become a sensation and spat out many hits. That kid is Justin Bieber.

In 2016, Bieber had already released four albums and had a hit number one on Billboard. Currently he is on his concert tour promoting his most recent album Purpose. A few days ago he invited Ludacris to come on stage and perform with him their viral hit song Baby. And the day after, Bieber surprised the audience with a duet with his former mentor. 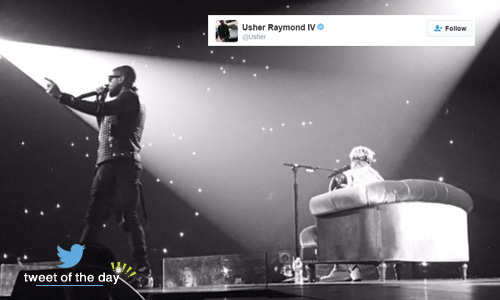 Bieber was in Atlanta, Georgia on 13 April when the touching reunion happened. What started as a heartfelt acoustic cover of Usher’s 2001 RnB hit U Got it Bad soon turned into a duet when Bieber called Usher on stage and the crowd erupted into screams. The two also went on to perform other Usher hits like I Don’t Mind and U Don’t Have to Call.

Bieber posted on Twitter that it was one of the best performance he has ever done yet and continued to thank Usher and Akon who also went onstage to perform with the Biebs on I Wanna Love You.

Usher then posted a black and white picture on Twitter of their performance that night with the caption “The Greats”.