The 37-year old All Of Me crooner and 30-year old supermodel/TV Host have welcomed their first child, a daughter named Luna.

Legend posted a tweet yesterday expressing his happiness towards the recent birth of their child on 14 April. Teigen has also posted the announcement on Instagram noting the newborn’s weight and captioned, “She's here! Luna Simone Stephens, we are so in love with you! And sleepy. Very sleepy,” 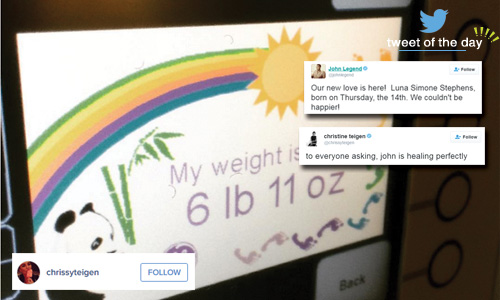 Teigan later then joked on Twitter saying that Legend is resting after the childbirth. And on another post she said, “thank you for all the well wishes!!! we are so happy and excited! i dunno what to tweet now.”

Last October on her show FABLife, Teigen opened up about having struggles to conceive. “We would have had kids five, six years ago if it happened. But my gosh, it's been a process. We've seen fertility doctors." She also revealed that they have undergone In Vitro Fertilization. However, in December Teigan announced they are expecting a baby girl.

As for future plans, Teigen and Legend are ready. "I think I'll probably be pregnant all through my 30s," she told Self magazine. "I've always pictured everyone around the table for the holidays and together once a week. It'll be heartbreaking if it doesn't end up happening.”

Legend and Teigen were married in 2013.