A 17-year old Tupac Shakur, who later become one of the greatest rappers in music history, wrote a sweet love letter to a girl in High School. The handwritten love letter was addressed to a girl he nicknamed “Beethoven”. The woman selling the letter says Tupac named her after the German composer because she played the piano and Tupac thought she had impressive skills. 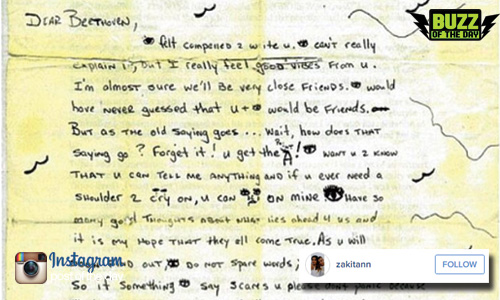 The woman says she met Makaveli in her drama class and suggested that he was a "REALLY good” actor and was impressed by his Shakespeare. They bonded over being outsiders, but unfortunately she was not a fan of the artist he later became.

RELATED ARTICLES: Is Diddy Behind Tupac Shakur’s Death?
Four Famous Musicians Who Predicted Their Own Death

The letter is dated November 22, 1988 where Tupac writes, “As u will soon find out, I do not spare words, I say what I feel. So if something I say scares u please don’t panic because I tend 2 get over emotional.” Some parts of the letter is written in rebus style, where Tupac drew an eye to represent “I” and doodled images of telephones and broken hearts.

The rapper continued to write and commented on their mutual interest in candles and for the musician Prince. He even offers the girls a shoulder to cry on.

“I can’t really explain it, but I really feel good vibes from u”

The woman says she and Tupac would sit after school and talk. When Tupac dropped out of high school, she only saw him twice and noticed that the man changed.

"I never really cared for the music he recorded - it was nothing like those freestyles in front of our school. I knew the kid who loved Prince, and candles and had a broken heart."

Tupac was killed in a drive-by shooting in Las Vegas in 1996 and today has sold over 75 million records worldwide.