They were like the Beyoncé and Jay-Z of the 80’s. They were the perfect superstar couple until the two exchanged comments of each other and their relationship turned sour. Madonna called Prince a “little troll” and he quipped about how Prince wouldn’t eat during a dinner date. “He was just sipping tea, very daintly. I have this theory about people who don’t eat. They annoy me.”. 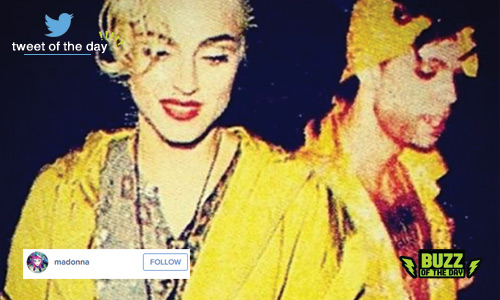 On the other side, Prince would often slam Madonna and her growing brood of children. Prince had even commented once, “I got so many hits y’all can’t handle me. I got more hits than Madonna’s got kids.”.

However in 2011, their decade long feud appeared to end when Prince did a shout-out to Madonna who attended his concert at New York City’s Madison Square Garden.

Back in the 80’s, Madonna and Prince’s relationship was high profile although they were rarely photographed. The two even collaborated together musically. They had a duet together with Love Song and Prince played guitars on some tracks from Madonna’s album Like a Prayer.

When news of Prince’s death was announced, a flock of celebrities expressed their sadness on social media. With a bevy of posts, Madonna’s may be the most heartfelt.

The Queen of Pop posted a throwback picture on Instagram. The picture taken sometime in the 80’s feature the pair matching bright yellow jackets and smiling. The picture was a snapchat of what their friendship once looked like. Madonna captioned the image with a heartbreaking sincerity that showed how much she really respected the man. “He changed the world! A true visionary. What a loss. I’m devastated. This is not a love song.”.