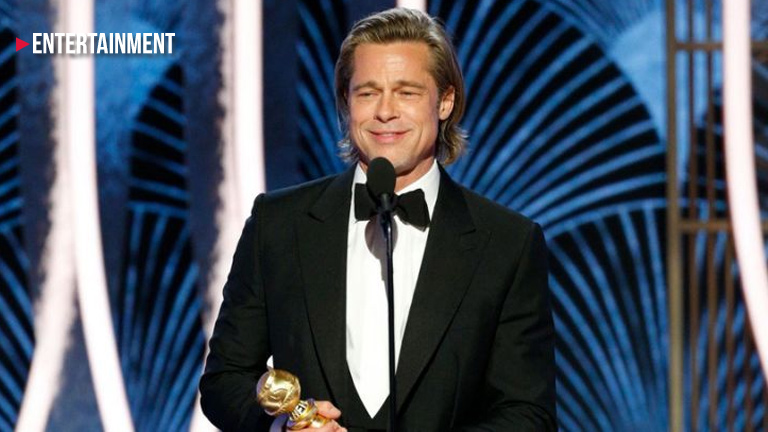 Brad Pitt won his  second Golden Globe on Sunday night, for the best supporting actor statue for his role in Quentin Tarantino’s “Once Upon a Time in Hollywood.”

Pitt acknowledged the competition in his category, including Tom Hanks (“A Beautiful Day in the Neighborhood”), Anthony Hopkins (“The Two Popes”) and Al Pacino and Joe Pesci (“The Irishman”).

The actor was up for playing stuntman Cliff Booth in Tarantino’s ode to the Golden Age of Hollywood. Pitt plays opposite Leonardo DiCaprio’s Rick Dalton, an aging star looking for his next break. Booth, his on-set companion, stand-in, driver and stuntman, endures the star’s many needs. On stage, Pitt expressed his gratitude for the cast and crew of “Once Upon a Time in Hollywood.”

Pitt told the crowd at the Beverly Hilton Hotel his family wasn’t in attendance because they were in the Ozarks. “I wanted to bring my mom, but I couldn’t because any woman I stand next to, they say I’m dating. It would just be awkward,” he joked.

Pitt has previously been nominated for a Golden Globe for “Moneyball,” “The Curious Case of Benjamin Button,” “Babel” and “Legends of the Fall.” He won in 1996 for actor in a supporting role for “Twelve Monkeys.”

Pitt closed out Sunday’s speech with a plea for kindness. “Hey, if you see a chance to be kind to someone tomorrow, take it,” he said. “I think we need it.”